Advertisement
HomeBOLLYWOODENTERTAINMENT NEWSSiddhant Chaturvedi and Sanya Malhotra roped in to dub the Hindi version of Men in Black: International

Siddhant Chaturvedi and Sanya Malhotra roped in to dub the Hindi version of Men in Black: International

While fans have been waiting for the much-anticipated Men in Black: International starring Chris Hemsworth and Tessa Thompson, it has now been revealed that Siddhant Chaturvedi and Sanya Malhotra have been roped in to voice Chris and Tessa's parts for the Hindi version of the film.

The action-packed spin-off film has introduced two new MIB members: Chris as Agent H, who Siddhant will be voicing for and Tessa as Agent M who will be dubbed by Sanya. The duo has already got the fire burning with their chemistry and now the Hindi version promises to be just as exciting. Actress Kriti Sanon was earlier being considered for the role but looks like Sanya got it in her bag.

ICYMI (or were recently neuralyzed)… watch the new trailer for #MIBInternational, in theaters June 14.

Excited about his first international association, Siddhant stated, "This cult franchise is a global phenomenon and has set a benchmark for sci-fi comedy films. I have been a fan of the films since childhood and extremely very happy to join the MIB family. Chris Hemsworth is a global icon and I have been religiously following him since his superhero days. To voice for his character is a dream come true and I hope with this project, I manage to live up to audiences expectations and sustain MIB's legacy in India."

Stepping into the world of Men In Black, Sanya shared, "I have thoroughly enjoyed Men in Black movies and have always been a huge fan of the stylish action and humor! I am very happy that I got the opportunity to voice for Tessa's character in Men In Black: International and be a part of this franchise in my own special way. She is really headstrong and fierce, something I relate to! This has been a unique and challenging experience and I hope my fans will appreciate this new venture from me!" 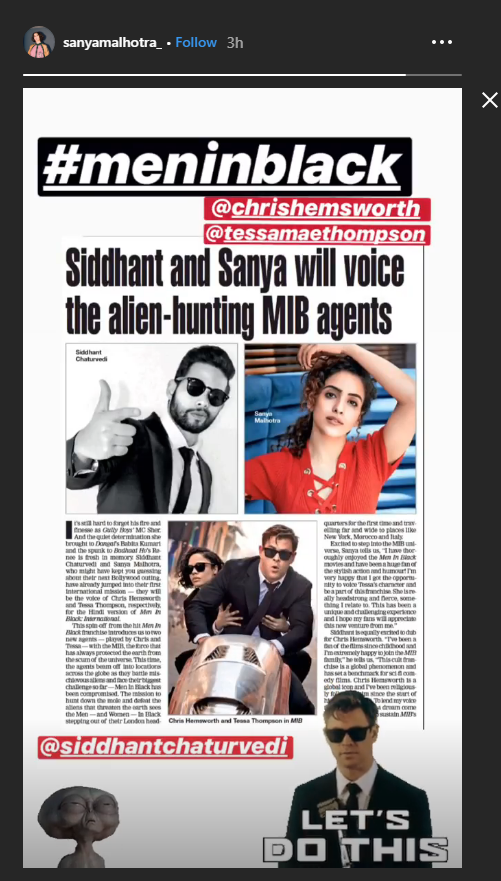 Siddhant made his Bollywood in the successful Gully Boy and has been winning hearts ever since. Sanya, on the other hand, gave a smashing debut with Dangal and Badhaai Ho and has become one of India's favourite girls. The current young sensations have now added a big-ticket international project to their roster Sony Pictures Entertainment India will be releasing Men In Black: International on June 14, 2019, in Hindi, English, Tamil and Telugu.