It is almost been seven months since Bollywood star Rishi Kapoor flew to New York with his wife Neetu Singh for an undisclosed illness. The actor was undergoing an unknown treatment in the US. Now, Rishi Kapoor's health update has finally been put out by filmmaker Rahul Rawail.

The filmmaker shared a picture with Rishi Kapoor and wrote, ''RISHI KAPOOR (CHINTU) is CANCER FREE!!!!”. Fans of Rishi Kapoor are showering love and are rejoicing over the post. Though the Kapoor khandan never revealed what Rishi was suffering from, Rahul's latest post states that the actor was undergoing treatment for cancer in the US. 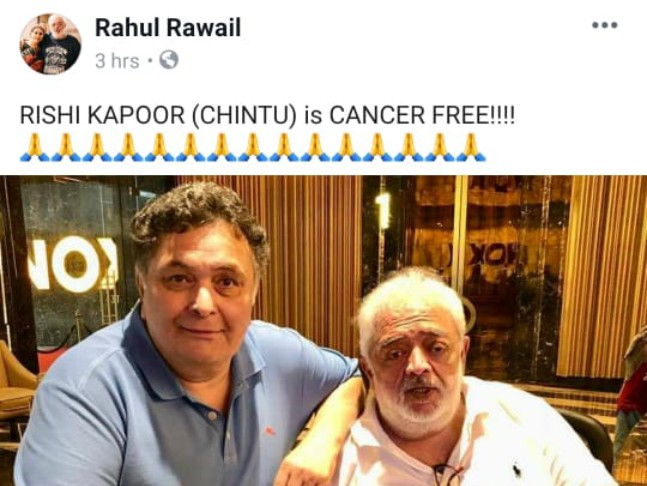 In an earlier interview with a news agency, Rishi Kapoor's brother Randhir Kapoor had opened up on Rishi's health. Randhir said, "I don't know much about it but this much I can tell you that [Rishi] is doing well, that's all."

Bollywood celebrities are eagerly waiting for Rishi Kapoor to make a comeback on the big screen. Many of them have also visited him in New York. Meanwhile, on the work front, Rishi was last seen in Anubhav Sinha’s Mulk that co-starred Taapsee Pannu.