Yeh Rishta Kya Kehlata Hai fame actor Karan Mehra has been accused by his wife, actress Nisha Rawal, of having an affair, taking her jewellery and beating her up. Karan was granted bail on Tuesday morning after his arrest the night before following a complaint by Nisha over a domestic fight. Following which, Karan had refuted all the claims including his extra-marital affair. However, amid the accusations of cheating on his wife Nisha, Karan's old Instagram chat with his Mawaan Thandiyan Chawan co-star Himanshi Parashar has gone viral.

Not only that but several pictures and videos of Karan and Himanshi have been doing the rounds on the internet. Sharing a video that seems to be a scene from the show, Himanshi wrote, "Karan says that i'm a down to earth person @realkaranmehra i knw it's lame. #bts @maavanthandianchaavan @zeepunjabi_off." Replying to this, Karan wrote, "I had said "Itna bhi nahi girna chahiye ki aap zameen pe aa jao" Cute moment and fun shooting with you." In response, Himanshi wrote, " apke liye hum kahi bhi gir jaynge karan ji".

Recommended Read: Karan Mehra reacts to wife Nisha Rawal's allegation of having extra-marital affair, says 'I haven’t cheated on her'

Now, this chat between Karan and Himanshi has been taking the social media world by storm after Nisha accused him of having an affair. 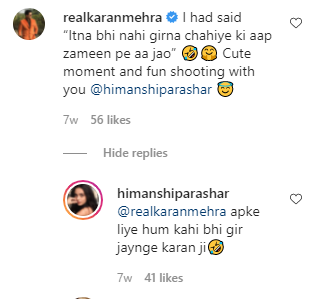 For the unversed, Karan is a part of a Punjabi show called Mawaan Thandiyan Chawan and Himanshi Parashar plays the lead opposite him. Nisha, in her claims, had revealed that Karan started seeing another woman in October 2020 when the shooting of his new show started in Chandigarh.

Karan, on the other hand, had clarified about not having any affair. "He said, "All these allegations are bound to come up and I will be linked with many people. These stories are baseless. I haven’t cheated on her and I am not having an extramarital affair."