Ekta Kapoor’s production house Balaji telefilms has issued a statement against an imposter who is posing as a fake casting agent for the company. The production house has filed a police complaint at the Amboli Police Station in this regard and asked the public to beware of such fake calls.

The statement read as, “We, at Balaji Telefims Ltd, would like to state that the said person who has sent this message is a fraudulent individual, who is posing to be our casting agent and sending extremely poor in taste communication to aspiring actors. We are neither associated with her in any capacity nor do we know this person. As soon as we were intimated about this matter, yesterday, we filed a police complaint with the authorities at Amboli Police Station against the said individual. We request you not to entertain such imposters.” 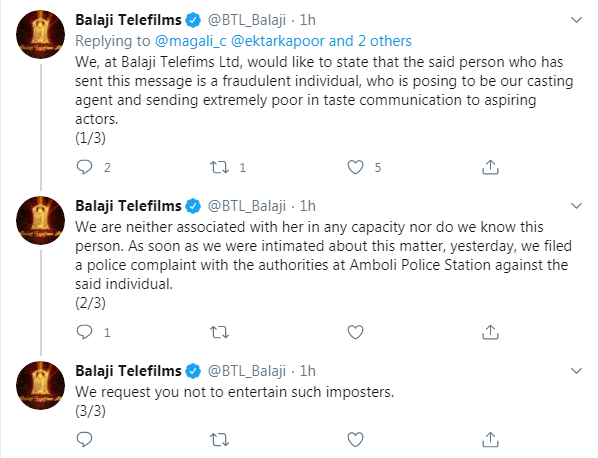 The issue was brought to the notice of the production house when a Twitter user shared the conversation of the imposter with the company. This is not the first time that such fake casting calls have come up.

Recently, director Shashank Khaitan had also issued a clarification and urged everyone to not believe the fake casting calls for his film Mr Lele.