Not replace, but Farah Khan to host two episodes of 'Khatron Ke Khiladi-Made In India' due to friend Rohit Shetty's hectic schedule

The adrenaline pumping tenth season of Rohit Shetty-hosted Khatron Ke Khiladi is inching closer to its finale. The season that scored high on TRP came to an abrupt end due to the Coronavirus pandemic. However, giving a major surprise to fans, the makers of the adventure-themed show have conceptualised a mini-series titled Khatron Ke Khiladi-Made In India. The team, after shooting for the finale episode in Mumbai on July 20, has reportedly started working on the mini-series.

Speaking of Khatron Ke Khiladi-Made In India, the first two episodes will be hosted by Farah Khan. Well, yes. But not to worry. Rohit, who has been the host of Khatron Ke Khiladi for numerous seasons now, is currently busy with prior commitments that went haywire due to the COVID-19. The filmmaker is in Hyderabad and will return to host the series once his work is completed. 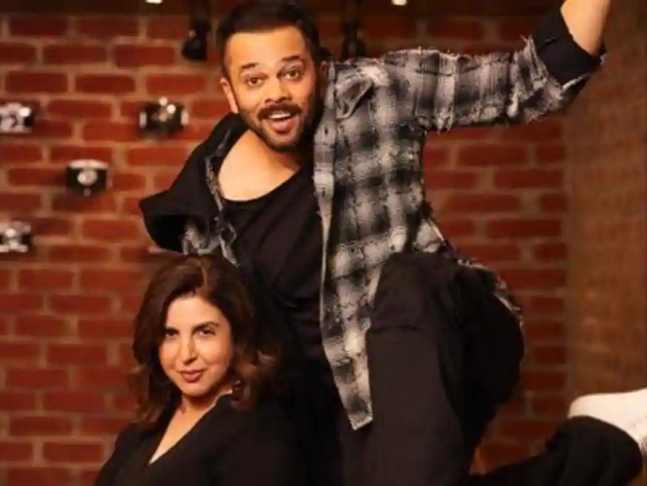 Recommended Read: Feels strange but as they say 'this too, shall pass': Rohit Shetty as he shoots for 'Khatron Ke Khiladi 10' finale in Mumbai with Karishma Tanna, Amruta Khanvilkar and others

Khatron Ke Khiladi-Made In India will be entirely shot in Mumbai, unlike its previous seasons that were filmed across exotic international locations. The participants are Karan Wahi, Rithvik Dhanjani, Harsh Lambachiya, Rashami Desai, Nia Sharma, Jasmin Bhasin, Aly Goni and Jay Bhanushali. Khatron Ke Khiladi-Made In India will premiere on August 1, 2020, on COLORS TV at 9 pm every Saturday and Sunday. According to PeepingMoon.com sources, contestants will have to perform stunts in five different zones like Golmaal Zone, Tehkhana, Dard Ka Darwaza, Purani Haveli and Villain Ka Adda.

He set an example so exemplary that I had no choice but follow: Varun