Advertisement
HomeTELEVISION NEWSTELLY BUZZKaran Patel takes a sly dig at Kangana Ranaut for her nepotism statements, questions why is her sister managing her production house instead of new people

With the untimely demise of Sushant Singh Rajput, the nepotism debate in Bollywood has kickstarted yet again. Karan Patel, who shared a close bond with the actor, spoke about being disturbed with the theories regarding his suicide that are doing the rounds. The Kasautii Zindagii Kay 2 actor, during an interview with a leading daily, told that when a person dies, people who are nowhere related to the deceased jump in and create stories. Karan took a sly dig at Kangana Ranaut without mentioning her name. He said she has been talking about nepotism and didn't hire a new person to manage her production house.

"An actress these days is talking about nepotism. If I am not wrong she came up with her own production house some time back so why didn't she cast Sushant in her film if she's such a big star. She first cast Sonu Sood and then later someone else, so she forgot about Sonu Sood. I have never seen her working with a new director or an actor. Before signing a film, I am sure even she must be asking which banner it is, or who the producer is, or which studio is backing it. So, when even you are running behind big studios then why are you blowing nepotism's trumpet. If you are that big-hearted and you have your own production house please go and pick a newcomer, a new director and work with him in his film as the heroine then we will talk and listen to you. You have your own production house and your family members, your sister is taking care of your business, why didn't you hire new people, an outsider and announce job interviews. Why didn't you hire someone who had an MBA degree to look after your production house," Karan told. 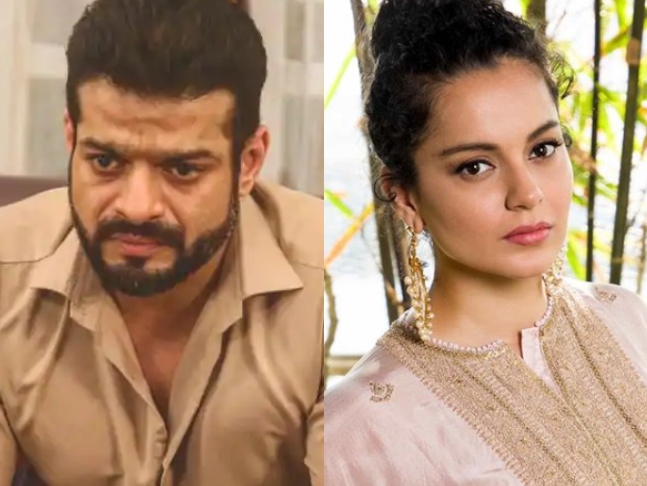 Karan further said that there is nothing wrong with hiring her own family and agreed that nepotism has been existing for ages. "I am not saying what she did was wrong by hiring her family. Today, if my father announces a business obviously he will ask me to look after it. Nepotism is everywhere and it has been going on for ages. I will be shocked if there is no nepotism. It is simple, a person works hard, he earns everything and once he is gone, obviously everything will go to his kids, and not to the neighbours. We need to think then why are we working so hard," he said.

Stating that he has no problem with star-kids, Karan added that a person will be successful only if he or she is talented. "I don't see any problem with the bigger stars launching their kids. Yes, sometimes it pinches me a lot too when I see a bigger star's kid getting an easier break. Mera bhi frustration nikalta hai... ki yaar isko itni easily mil gaya but then that is his/her destiny. Aap is ghar mein paida hue woh us family mein paida hue...End of the day only if you have talent you will survive. There have been so many cases when actors launched their kids in a big way, but they are nowhere today. It is a matter of patience and time. You will also get that success, maybe they got at the age of 27, and you will get at 35, but if you have talent you will get it," Karan added.

Kiku Sharda dismisses rumours of a fallout with Krushna Abhishek over