Advertisement
HomeTELEVISION NEWSTELLY BUZZNever ending fight! Akanksha Puri hits back at Paras Chhabra for claiming that people know her only as his ex-girlfriend

Bigg Boss 13 fame Paras Chhabra had recently claimed that his ex-girlfriend Akanksha Puri has no identity of her own and is only known as his ex- girlfriend. And now, Akanksha has hit back at Paras for such claims. She said that it was weird, as he was still talking about her in his interviews, despite doing two reality shows back-to-back.

“I don't have an identity, he is used to feeling insecure when people used to call him my boyfriend. There is also an incident that I would share because he claimed that I don't have an identity. There was a news that came in a leading paper when he entered my show for a track of three months, he was very upset with the article and even called the editor and had a huge argument with her for the headline as he said earlier he was known as Sara’s Boyfriend and now he cannot take the tag of Akanksha Boyfriend. The editor clearly explained to him that it’s her show where she is the lead and that how she wrote this, he became lil rude then she clearly told him that it’s not a paid article. She will write what she wants to write, he can’t instruct her, he was even not happy with his picture. Later I had to call the editor because she gave me this article and I have good terms. Later I called her and apologised. I said sorry on his behalf. I felt extremely embarrassed and said so sorry to her. Even when I posted on my Social media I had hidden the headline because he wanted it that way,” Akanksha Puri said in a statement. 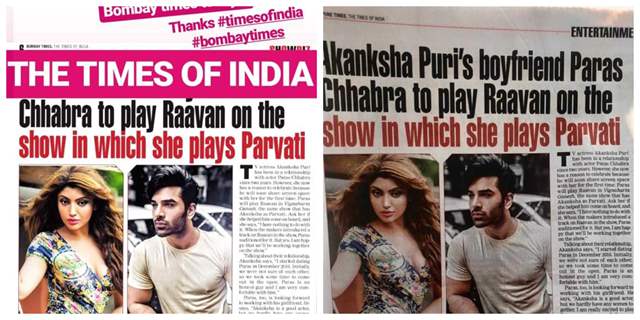 She further added, “Also, the thing didn't end here, the same day Paras had shot as Ravan and I had an off he was going to the set and I knew he would create a scene in that mood. I told my friend Kuldeep who plays Vishnu, my brother, in the show that he is upset with the article headline and coming to the set and told him thoda Sambhal Lena, he told me don't worry main Delhi style mein boys style mein samjha dunga and he will be fine. He spoke to Paras and Paras said that Maine spiltsvilla kiya hai, I have a name, Akanksha ko janta Kaun hai, how can they say I am her Boyfriend in the headline. Even Kuldeep told me Akanksha he disrespected you a lot and no boyfriend talks like this about his girlfriend to a third person, he has no respect, think before u go ahead with this guy.

Paras and Akanksha were in a relationship for three years but it ended after his Bigg Boss 13 stint. He made headlines for his closeness towards co-contestant Mahira Sharma inside BB13 house, which was said to be one of the reasons behind his breakup.

'We need to talk more about mental health,' say Karan Kundrra, Arjun B