Deepika Padukone has left everyone impressed with release of her upcoming film Chhapaak’s trailer, in which she essays the role of Malti an acid attack survivor. Her character is based on the real life of Laxmi Agarwal an acid attack survivor who fought all odds against the sale of acid freely in the country. The actress has kickstarted the promotions of her maiden production and recently appeared on Kapil Sharma’s show, The Kapil Sharma Show, with director Meghna Gulzar.

A leading Bollywood photographer shared pictures from the sets on his Instagram account and wondered whether Kapil showed Deepika a picture of his new-born daughter. To which Deepika replied, “He did! & she’s adorable!” along with a heart-eyes emoji.

Did #kapilsharma show his new Princess to #deepikapadukone today? I'm sure he must have shown her the picture from his phone 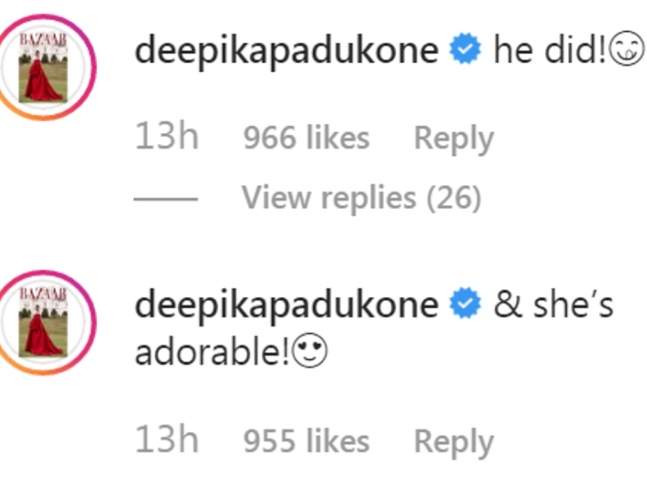 Kapil Sharma and his wife Ginni Chatrath welcomed their first child on Tuesday and the comedian made the baby announcement with a heartfelt post on social media. Introducing the newest member of his family, Kapil Sharma tweeted, "Blessed to have a baby girl. Need your blessings. Love you all."

The two got married as per Hindu and Sikh traditions in Jalandhar in December last year. The couple later hosted two grand receptions - in Amritsar and in Mumbai- where the latter was attended by Bollywood's A-Listers.